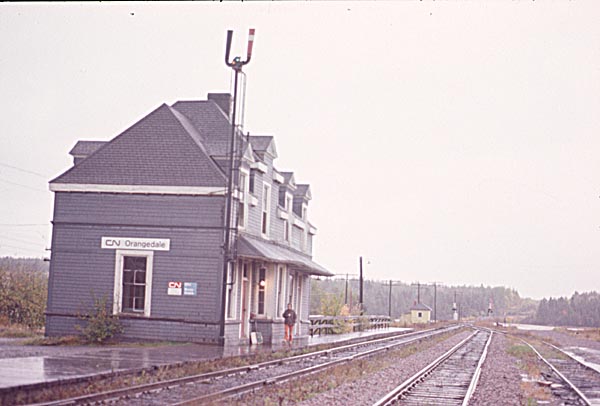 When the station was built in 1886, it was used initially as a home before the track was laid and the first trains began arriving in 1891. The first floor of the building consisted of the men’s waiting room, the agent’s office, and the women’s waiting room.

The entire second floor was a large apartment which provided a home for the Station Master and his family – the MacFarlane Family of Mull River and Orangedale were resident there for two generations with Jim MacFarlane being the first station agent for the Orangedale Station.

Except for a few internal and roofline changes, the building is today much the same as it was originally constructed in “Railway Queen Anne” style with a bold statement of the hopeful nature of Cape Bretoners and Nova Scotians in the 1880s when it seemed that the economy in a new industrial age would be strong.

The station’s basic structure was built of large, well squared, stacked timbers (rather than the more traditional frame structure), sawn at a local mill and dragged by horse teams to their destination. The construction reminds one of older log houses that had timber placed on timber. The building has modified turrets and a number of very intricate features such as the winding staircase leading to the first floor and the scalloped shingles, applied directly onto the timbers and painted in “Intercolonial Red” – typical of many stations of the period.

Most of the obvious architectural features were also typical – dormers with triangular pediments above the windows, a bay window, very tall windows (many of them still with their original glass), and decorative work under the eaves.

During restoration much research has gone into the colour of the paint and the trim, and the design of the canopy covering the station platform. With countless hours of voluntary work by the local residents of the area the building has been carefully returned to something quite similar to its original condition and is now a treasure in the collection of historic Inverness County Architecture.